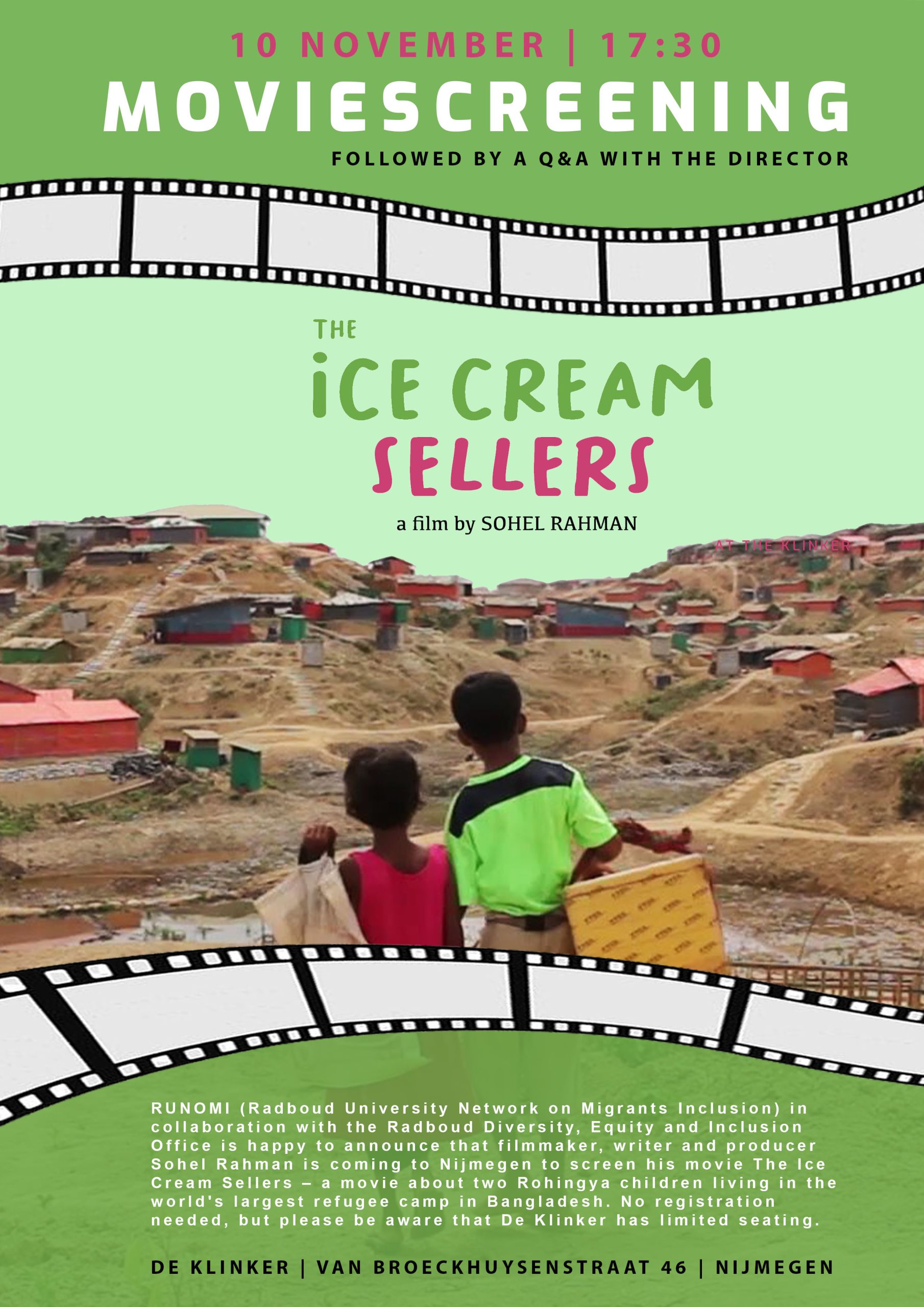 RUNOMI (Radboud University Network on Migrants Inclusion) in collaboration with the Diversity Equity and Inclusion Office of Radboud University is happy to announce that filmmaker, writer and producer Sohel Rahman is coming to Nijmegen to screen his movie The Ice Cream Sellers – a movie about two Rohingya children living in the world’s largest refugee camp in Bangladesh. You are most welcome to join us at De Klinker (Van Broeckhuysenstraat 46, 6511 PK Nijmegen) on 10 November 2022 from 5:30pm for the screening followed by a Q&A with Sohel. No registration needed, but please be aware that De Klinker has limited seating.

Debate cycle
This movie night is part of De Klinker film debate cycle in collaboration with the Diversity Equity and Inclusion Office of Radboud University and RUNOMI and marks the beginning of a new film cycle. The content and discussion of this movie can be a triggering and/or challenging experience for some. Please have consideration for each other.

The Ice Cream Sellers
The Ice Cream Sellers (75″) tells the story of two little siblings and the genocide survivors of the Rohingya community who fled from Myanmar into Bangladesh after a brutal genocide. While most of the Rohingya people were exhausted from the weight of their trauma, the two siblings began their new life with hard work, selling cheap ice-cream door to door in the world´s largest refugee camp in a desperate attempt to earn enough money to bribe officials for the release of their father from prison in Myanmar.

The film invites the audience to become a part of the journey of two children across the refugee camp in Cox’s Bazar, Bangladesh, just as the director himself was invited and received intimate access into their journey of life. The film portrays a story of tragedy and loss, courage, and suffering. On one hand, we have parents’ harrowing tales of their flight from their homeland, and on the other, we see laughter and the irrepressible spirit of the children.

Sohel Rahman
Sohel is an award winning filmmaker, writer, and producer based in Lisbon, Portugal. His films have been screened internationally in various film festivals and universities around the world. Sohel received the best feature documentary film award from South Asian Film Festival of Montreal, Canada in 2021, and from Tasveer South Asian film Festival, Seattle in 2021 for his film The Ice Cream Sellers 75” (2021).