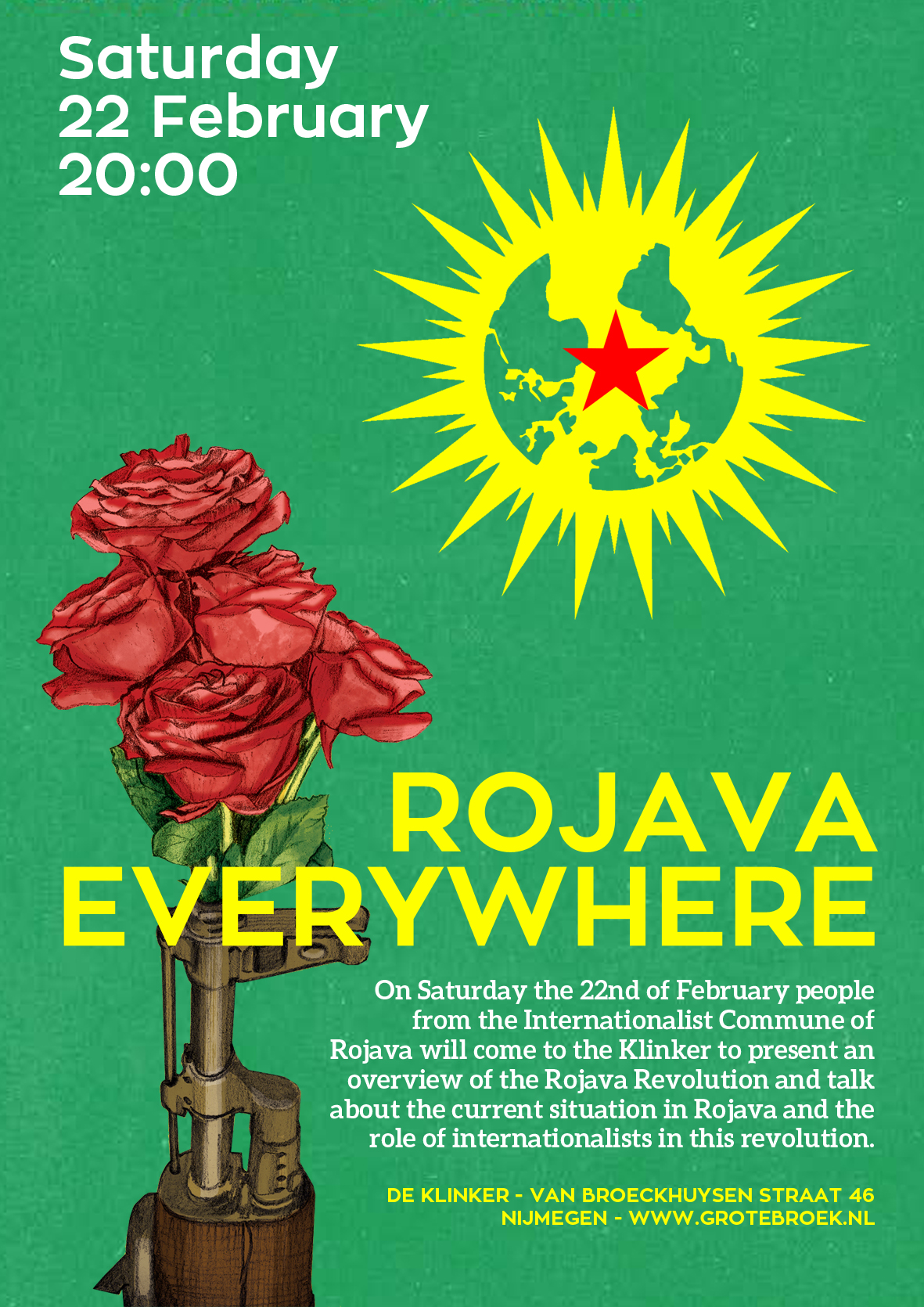 On Saturday the 22nd of February comrades from the Internationalist Commune of Rojava will come to the Klinker to present an overview of the Rojava Revolution and talk about the current situation in Rojava and the role of internationalists in this revolution.

Seven years ago a revolution began in Rojava that was to radically change the lives of millions of people. The Kurds liberated themselves from the dictatorship of the Assad regime and began to organize themselves in self-governed councils, communes and cooperatives. In particular, the autonomous organization of women became the driving force behind the social revolution.

However, since October 2019, following the occupation of the Afrin canton two years ago, the Turkish State has started an invasion of the territories of North-East Syria that puts the revolution under big threat. While the population of Rojava continues their struggle for self-determination, women’s liberation and radical democracy, defending itself against the attacks of jihadist gangs and the fascist Turkish state, the representatives of hypocritical governments shake hands with the Turkish oppressors. While liquidation plans against the revolution in Kurdistan and Syria are made in Ankara, the European, Russian and USA weapon industries become richer day by day as a direct result of the wars in the Middle East. They make profits which cost millions of lives.

In this difficult times, it is necessary to show solidarity and do whatever we can to defend this revolution!

Supporting the revolution does not only mean joining in demonstrations or sending donations. It means also organizing the revolution where we are, and being connected to our local struggles. Rojava needs us, but even more, we need Rojava. We need hope, faith, inspiration and new perspectives in a collective struggle against oppression. In the Western world the authoritarian state and rightwing movements are celebrating their comeback. Trump, Erdogan and Putin are removing the last masks of democracy. In the face of this developments, most revolutionary movements stand frozen. Marginalized and without perspectives, scattered and estranged, the only role the system leaves for them is to observe and criticize.

Rojava presents a way to overcome this dilemma: Learning from the Kurdish movement means to organize and spread the revolution.

More information about the Internationalist Commune of Rojava and their campaign you can find here: www.internationalistcommune.com & makerojavagreenagain.org.